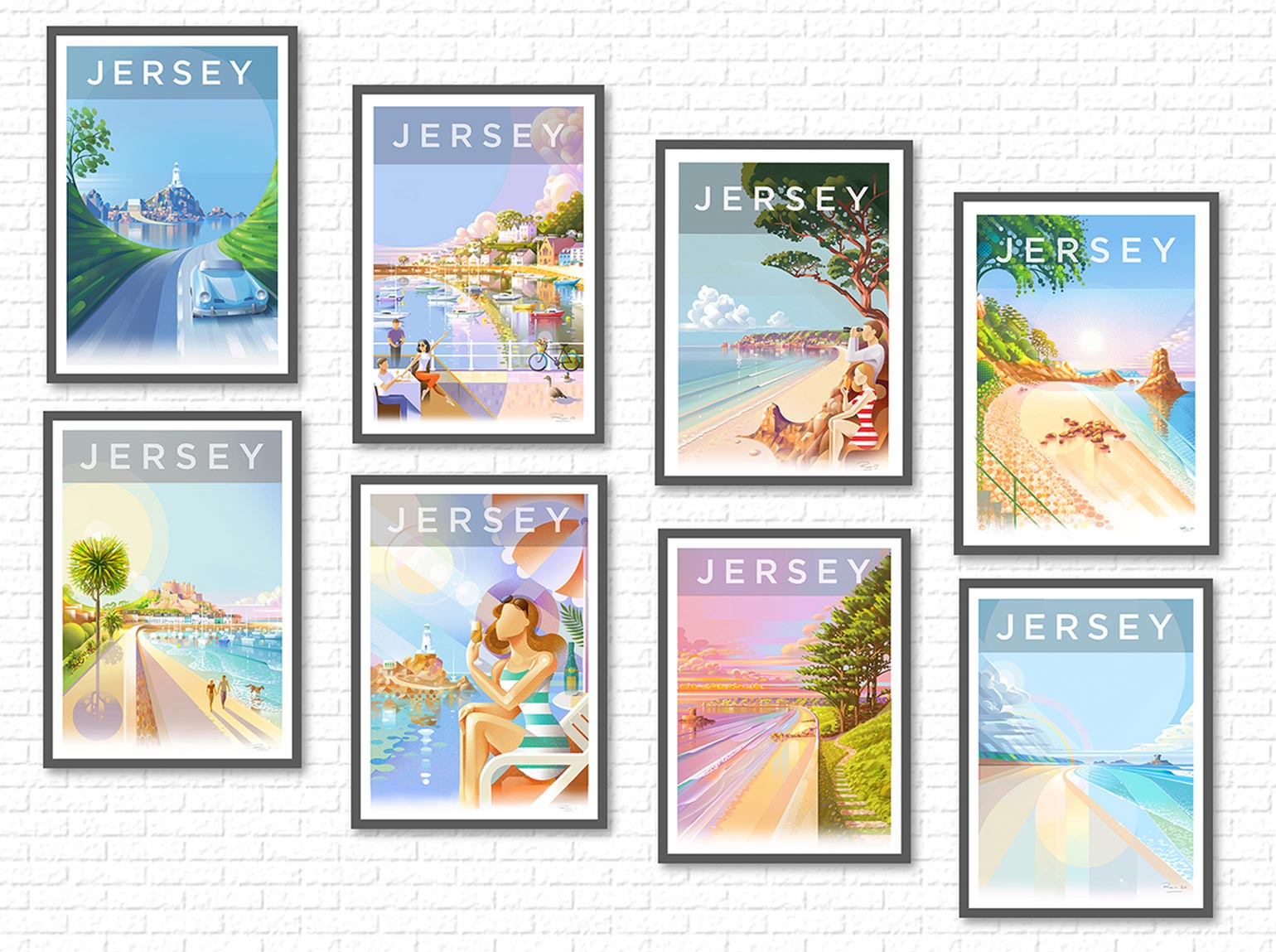 Local artist and designer Ron Mills talks about the artistic process and production of his series of retro/modern Jersey travel posters.

At the end of last year, I was asked to re-brand a cafe in town and give it a new look. The client initially suggested using art deco as a design theme. Even though I like art deco artwork I thought that 1930’s style was a bit old fashioned. My suggestion was to produce a modernised version of art deco to appeal to all ages.

Part of the design was an eight-foot tall poster featuring St. Brelade's Bay for the outside of the building in a prominent spot in town. It looked cool and a few weeks later in November, I had the notion of producing a similar image as a Jersey travel poster that people could hang on their walls.

Much to my surprise, when I posted it on Facebook, orders came in instantly. People were also asking me to do other iconic Jersey scenes in the same style. I was extremely flattered and only too keen to produce others. I named the style I had developed as retro/modern and got to work on producing a series of them.

Since November I have been constantly working hard producing new ones every few weeks.

After deciding on the location of a poster, I go there and walk around for an afternoon just looking at it. What I am looking to portray is a simplified mental impression of the place rather than an accurate photographic representation of it. I deliberately don’t take a sketchbook or camera with me, as I seem to get better results working from memory.

On my return home that evening I pour a glass of wine, put on some music, get relaxed and then reach for my sketchbook and pencil. When producing the composition of the poster I try and represent the scene as simple as possible using only a few lines and shapes. I probably do around fifty of these small simple sketches before being happy enough with the finished basic concept. Next comes the large finished pencil drawing, where I begin to work out the smaller details and shading.

The next stage is the colour sketching. After transferring the pencil work onto my iMac I work on the colour sketches digitally. Originally, I hand-painted the colours using acrylic paints to work out the colour schemes of my posters. Lately, I’ve taken to digitally painting them on screen as this saves time. In my experience planning out the colours beforehand saves a lot of correction time in the long run. I tend to do these very quickly and roughly as these are simply a plan for my benefit and no-one ever sees them.

With the pencil and colour rough sketches complete, I place them in separate layers on an Adobe Illustrator file. I then begin working on the finished poster by drawing and building up layer upon layer of simple shapes on top of each other. I like to think of it as painting using building block shapes rather than brushes. This is a time-consuming process and uses hundreds of separate layers.

When the first draft of the artwork is complete, I often show it to a few friends for their comments and I’m receptive to suggestions from my online followers. The goal, after all, is to produce something that the audience will enjoy. I’m not so precious about my art that I won’t listen to constructive criticism. This is still a very new thing for me and I am thrilled that people like my posters enough to hang them up on their walls.

On completion, I send my work to John at Captured Dreams for printing. I frame the pictures myself and make a point of delivering each one personally. The greatest buzz I get from producing these posters is meeting the people who enjoy them and seeing the smile on their faces when I hand them over. I love producing iconic Jersey scenes in this style and will keep producing them as long as customers want them.

Win yourself a framed copy of Ron's "St Aubin" Jersey Travel Poster, as featured on the cover of the 2020/21 Jersey Directory, when you enter the JT Directory "Review to Reward" Challenge. Click the image below to enter, entries close Nov 30. 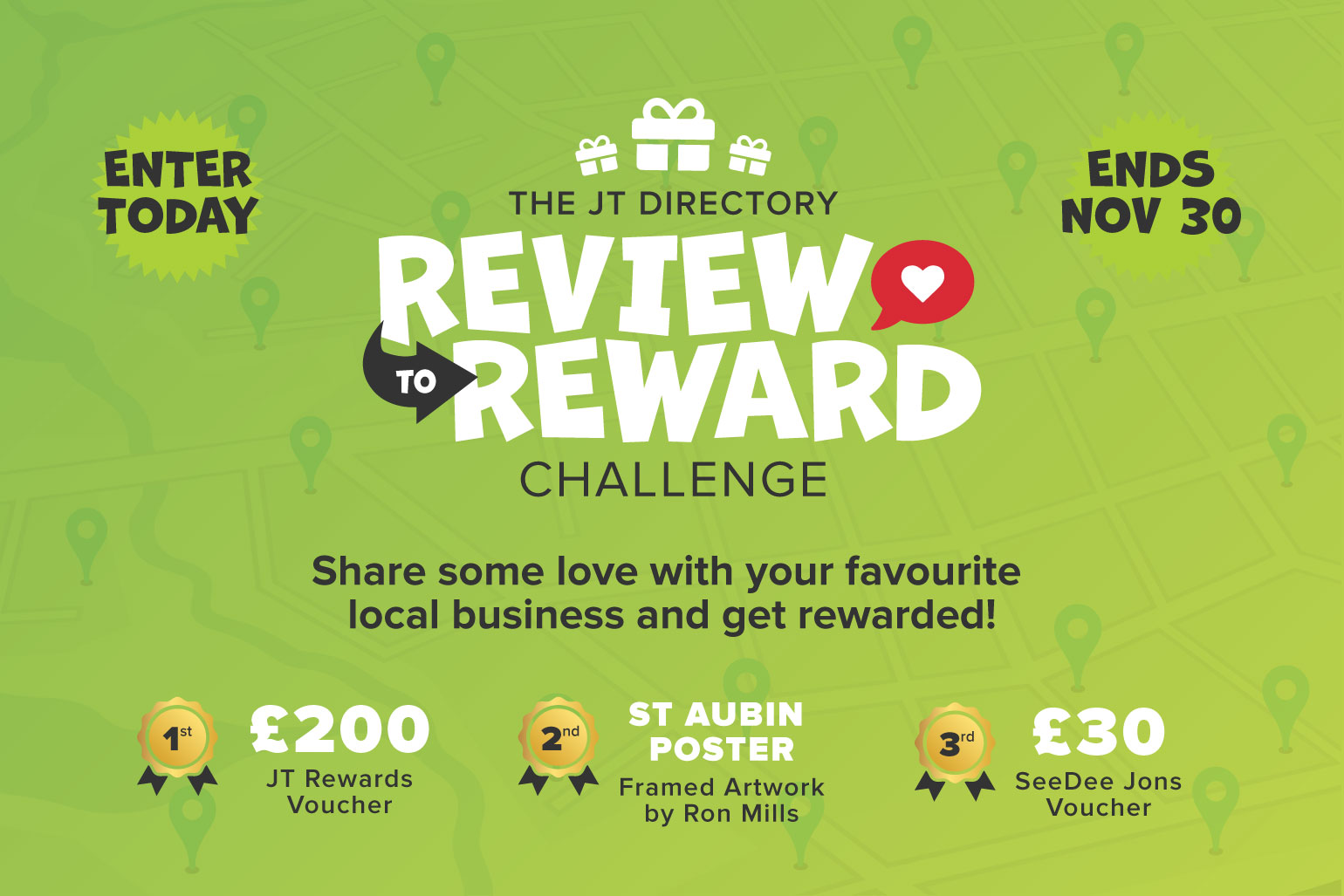 St. Aubin's, featured on the 2020/21 Jersey Telephone Directory, is captured wonderfully by Jersey Illustrator Ron Mills.  We talk with Ron and discover what inspires his unique illustrations of the island.