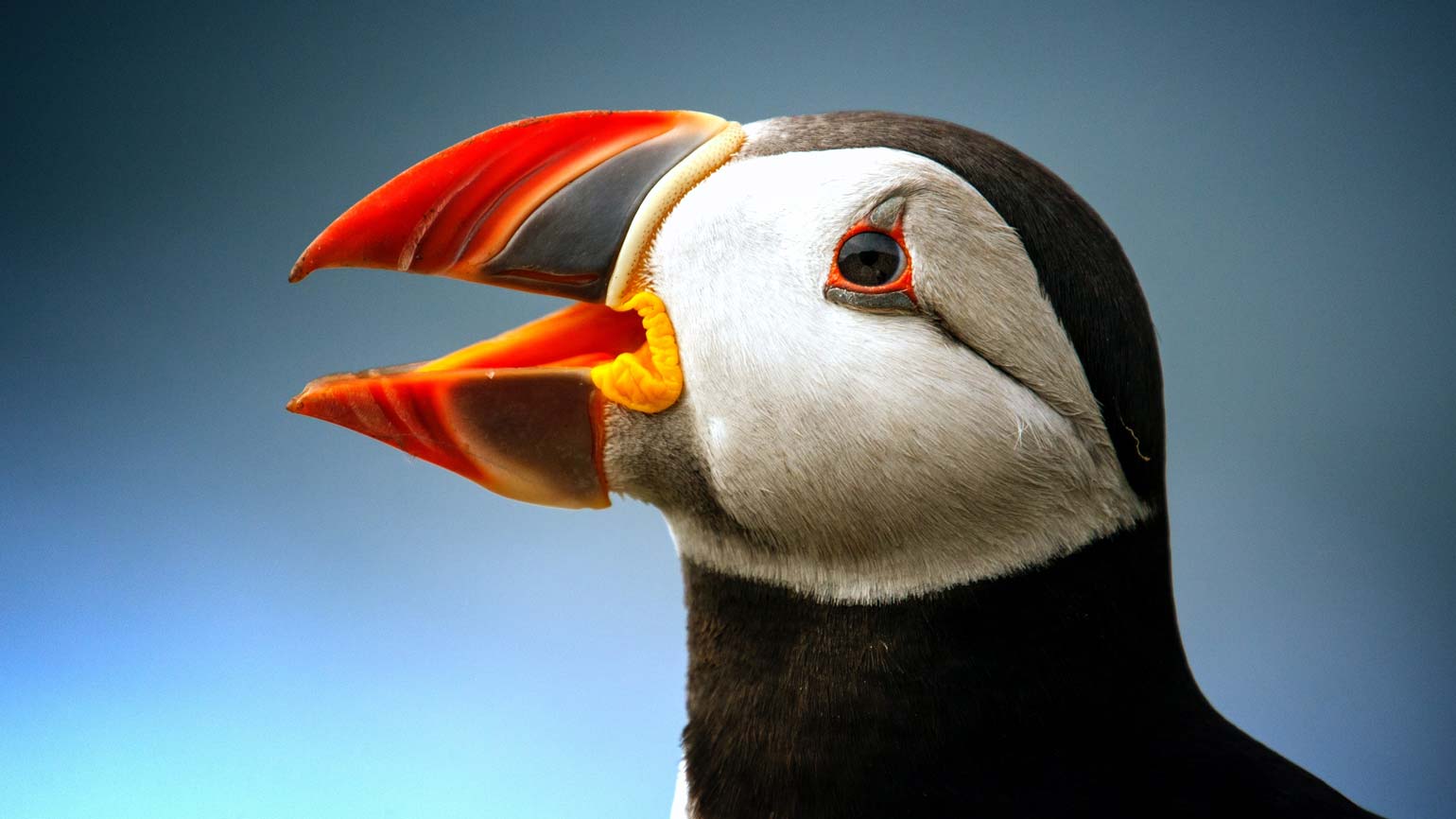 The Atlantic Puffin is an iconic bird in the Channel Islands, and in Jersey, they can be seen around the north coast between Plemont and Greve de Lecq during breeding season from April to mid-August.

Having lived in Jersey most of my life I still hadn’t seen this beautiful bird until last year. I was kayaking the coast from the left of Greve beach for a change as usually I always kayak right towards the small beach called Little Greve. As I came around a corner I saw several small birds with tiny wings flying in a peculiar manner. They flap their wings frantically and fly towards the water in such a straight direct line it almost appeared as if they were on a zip wire. When I grabbed my binoculars for a closer look I saw the unmistakable beak and instantly recognised this enchanting little creature. Intrigued I began delving into finding out more about the puffin as realised how little I knew about them.

Puffins are around 25cm - 29cm so smaller than a pigeon with colourful faces, beautiful hooked beaks and penguin type coats. On land they are upright with a black back, white underparts, pale grey face patches, brightly-coloured bill and black and red skin around the eye giving it a clown-like appearance and just to finish off bright orange legs and feet. During winter they gain more black feathers and their beaks turn black and dull grey.

Atlantic Puffins which are nicknamed ’Sea Parrots” or “Clowns of the Sea” and spend most of the year out at sea far from land. Their waterproof feathers allow them to stay warm and when not swimming they rest on the ocean’s surface. What’s more, these brilliant birds are great swimmers, too! Using their webbed feet as a rudder, puffins can dive down 60m underwater in search of their favourite fish, which is their preferred food. They live off small fish such as herring, capelin, hake and sand eels and supplement their meals by drinking salt water.

These seabirds are also excellent fliers, flapping their wings at up to 400 beats per minute, which allows puffins to reach speeds of 88 km/h (55mph).

Puffins live alone on the sea for 8 months but then become very social when they come ashore in April to breed.

When a puffin is around 3-5 years old, it will choose a partner at sea to mate with for life and they live for around 20 years.

Once on land, the couple digs out a burrow using their sharp claws and beak, usually in a grassy bank or rocky crevice on steep sea cliffs so predators cannot easily reach them. Most burrows are 2 to 3 feet long and have a sharp angle before leading into the main chamber. At the back of their burrow home, they build a nest lined with feathers, seaweed and grass where the female lays her single white egg. Both parents take it in turn to incubate the egg for the next 36-45 days before the baby ‘puffling’ hatches! Often, couples will return to the same burrow year after year.

The puffling hatches the mother and father will take turns bringing it fish to eat several times a day. Atlantic puffins have the ability to carry several fish in their beaks at one time. They push the fish to the back of their mouth with their tongue, where ridges at the top of their bill secure the fish in place. This allows puffins to keep their mouth open to catch more fish without losing any in the process.

The greatest natural predator to the puffin is the Great Black-backed Gull. This gull can catch adult puffins in mid-air or swoop in on a puffin on the ground. Herring Gulls often wait for puffins returning from sea with a beak load of fish, pursue them and steal the fish. They will also pull eggs or pufflings from their nest. Puffins will often circle past their burrow a dozen times or more making sure it is safe to deliver the food.

The puffling stays in the burrow until it is able to fly. After 45 days, the puffling leaves the burrow and spends 3-5 years at sea learning about feeding places and choosing a mate before returning back to land.

PUFFINS IN THE CHANNEL ISLANDS

In Jersey during this year, 2020 a total of 17 puffin nest boxes have been buried in the cliffs north coast aimed at improving the habitat and breeding opportunities for the small puffin population.

The installation has been a collaboration between Birds On The Edge and Geomarine Jersey, who sent their ‘rope team’ to assist the rangers of the National Trust Jersey and the Environment Department.

Across the water, on Alderney, Teaching Through Nature have live Puffin cameras and it so interesting to watch them returning back for the breeding season, clearing or building nests and raising their chicks. There are 3 cameras; a main camera, a close-up camera along with the colony camera with each camera putting out an infrared light at night which enables you to watch all the nightlife too.

Open up one of the webcam streams and sit back and relax, you won’t be disappointed. 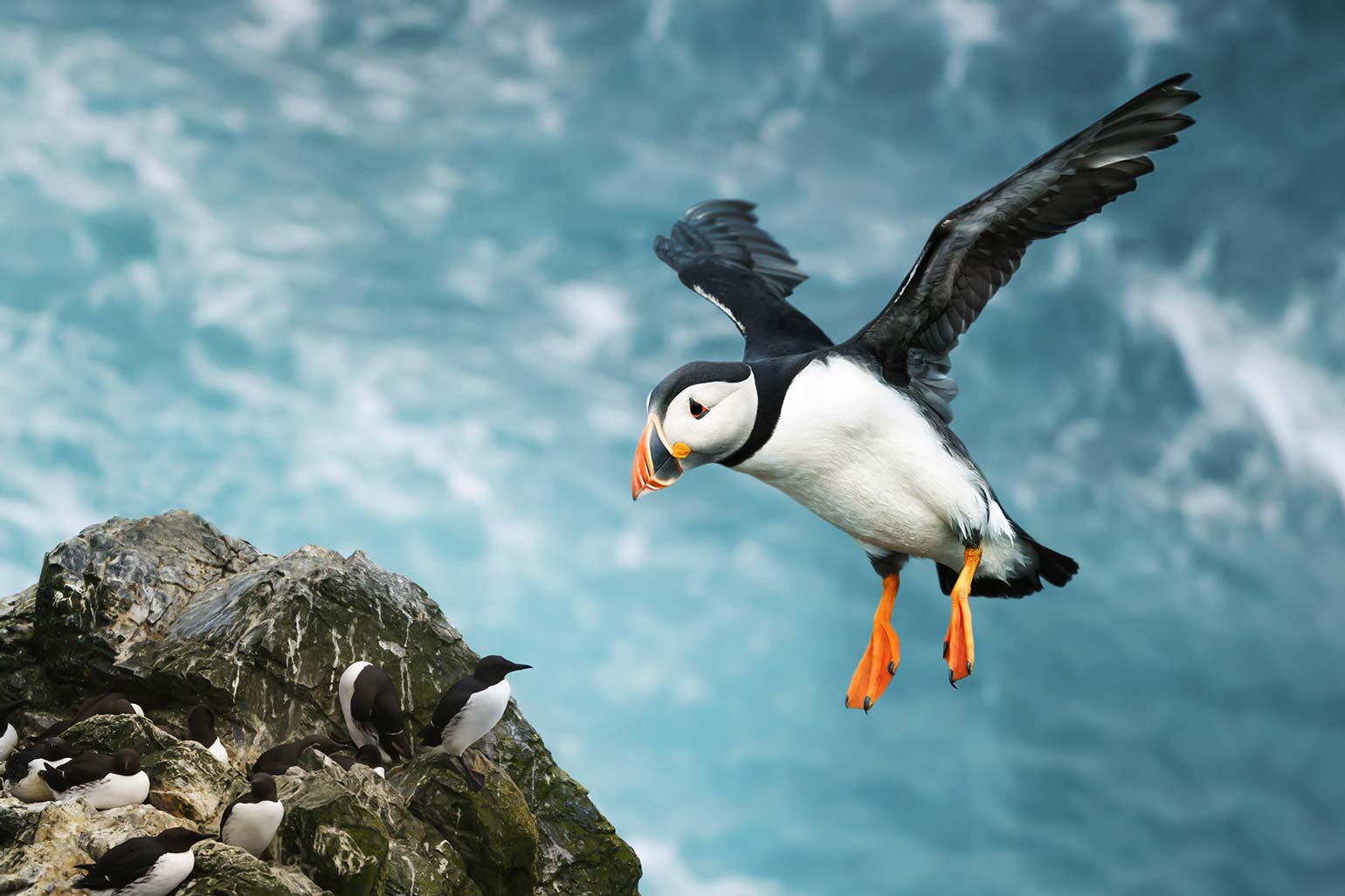 Whether you’re visiting or live in Jersey, there are many exciting things to do all year round. So if you’re the adventurous type, these activities are sure to interest you.

A film festival showing a total of 12 war films. One film is shown in each parish, culminating in the grand finale at...
5 Jun
Film Festivals

The aim of the event is to raise valuable funds for the Bloodwise Charity, through participating in a fun kids...
6 Jun
Race Events
View More
Advertisement
Previous Next